Black Friday: upto 20% discount on all Surveys and Valuations

Dry Rot: what is dry rot and how to treat it?

Dry rot is a fungus which attacks wood. It is particularly scary for householders as it can be expensive

Dry rot is a fungus which attacks wood. It is particularly scary for householders as it can be expensive to treat. Our surveyors are trained to spot the signs that may lead to a dry rot outbreak.

Dry rot spores are in the air. In order for an outbreak to start, it needs food in the form of timber (such as floorboards, skirting boards, etc) and a source of moisture (such as a leak). It feeds on wood with a moisture content of at least 20%. What makes it particularly difficult and expensive to deal with is that the strands of fungus will spread across walls and timbers looking for a source of moist wood. It will even spread through brick walls and plaster.

It will often grow in unseen spaces such as underneath timber floors, under baths, under stairs, etc.

The first characteristic sign is a damp musty smell similar to mushrooms. Timber will tend to crack as the fungus eats it and dries it out. There may be a mushroom-like fruiting body which often has a red appearance initially but usually develops a lemon tinge when exposed to light.

In the photograph below, a shower has been leaking on the other side of the wall. The fungus has grown through the wall and started to attack the timber skirting board. This is a dry rot outbreak in its early stages. 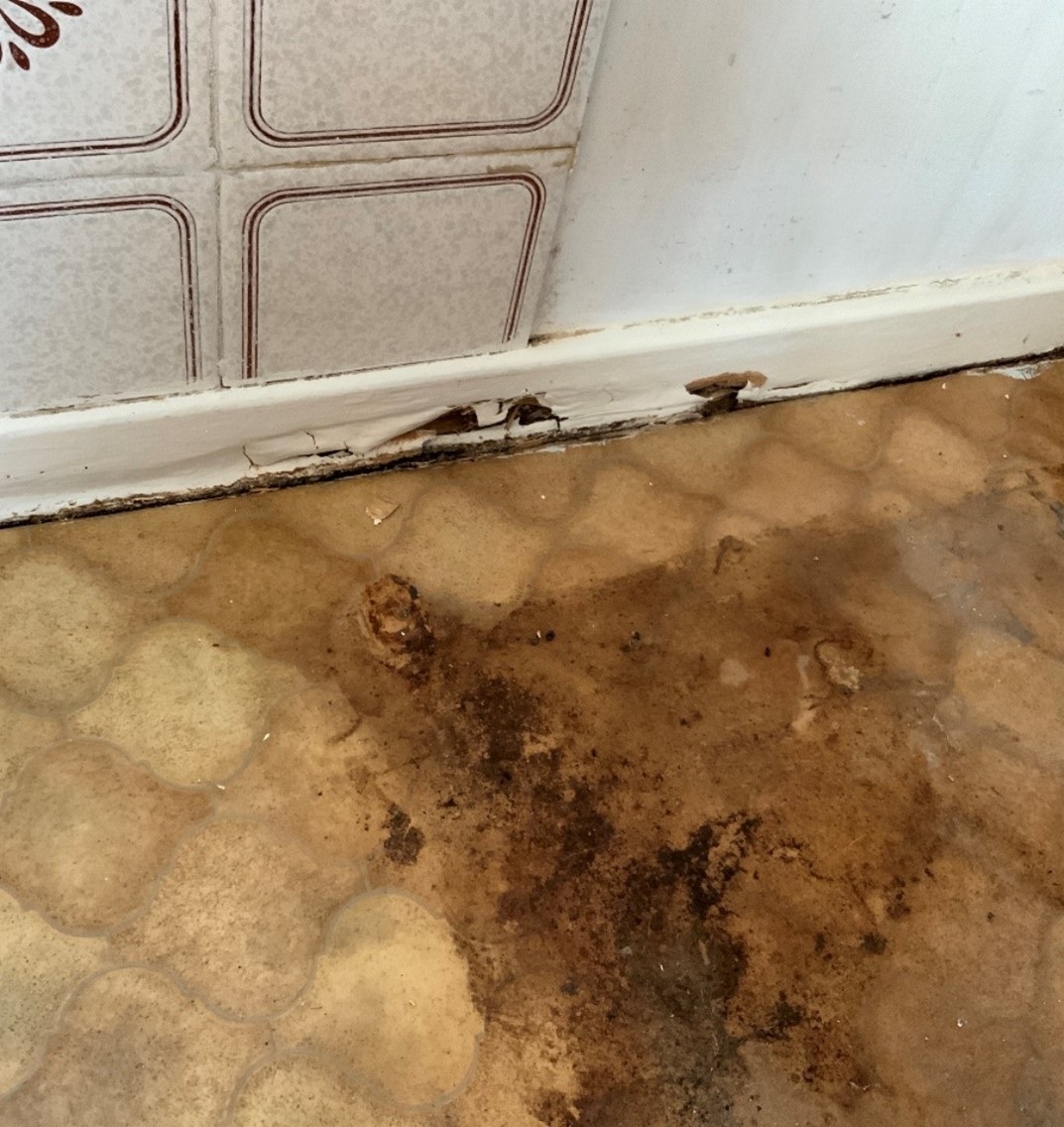 A more advanced outbreak is shown in the top image of this blog and it shows a dry rot fruiting body.

How is dry rot treated?

The first step is to identify the extent of the outbreak. This may involve lifting floor coverings, removing wall finishes such as tiles or wallpaper and inspecting under floors, etc.

The source of moisture must be identified and fixed, after which affected areas will need to be dried out – a dehumidifier is often used along with heating.

All affected timber needs to be removed and sound timber and walls treated with a fungicide treatment to kill the spores.

If the surveyor reports on an actual or suspected dry rot outbreak, normally a recommendation would be made for a specialist timber treatment contractor to further inspect the property and provide a cost estimate for works involved. This should be obtained in writing with the plan attached showing where proposed treatments will be carried out in the property. This really needs to be actioned before the intended purchase of the property goes ahead, in order that as a buyer, you are fully advised of the condition, risks and costs of work before you go ahead. You will also then have the opportunity of renegotiating your purchase price, which in some cases could save you £thousands.

A Cheaper, Faster and Objective way to survey and value residential property

Our local RICS surveyors cover all postcodes in England and parts of North and South Wales.